The annual convention was just weeks away, and the chairman was sick. You know, when you’re the vice-chair of anything, you don’t have much to do. You’re
the “chairman

in waiting.” So there I was, vice chair of the regional gas utility marketing association, on the eve of our annual convention/training event, suddenly thrust into the role of the guy in charge. The chair’s job at the convention was to be the host, to make introductions and to see that everything ran smoothly. It was the introduction thing that proved to be the most interesting.

Because, you see, it was our tradition at the close of the convention, for the chairman to introduce the incoming chair, and for the new chairman to assume the role of host for the conclusion of the day. So, I got to introduce myself. I had a blast, “roasting” the new chair before an astonished audience, and then graciously accepting my new role.

So, I wonder, if you had to introduce yourself, what would you say?  Basically we do that every day, with our conversations, web pages, blogs, texts, tweets and Facebook posts. What are you saying about yourself that will make people want to follow you? Is what you’re saying the truth? Is it worthy of being said at all?

Matthew 5:16 (ESV) In the same way, let your light shine before others, so that they may see your good works and give glory to your Father who is in heaven.

Energy conservation is important, but some of the details can be a little dry. Who gets excited about caulk and insulation batts? As manager of conservation for a gas utility, I planned, chaired and presented at many training conferences. Energy auditors would attend for two or three days to learn the latest and greatest. Once, I was asked to do a presentation on furnace maintenance. Wow! There’s a subject to get the juices flowing! So I decided to have fun with it. 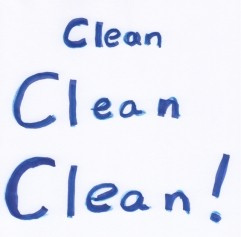 I ditched my suit in favor of a set of blue coveralls and a cap. I made a set of transparencies with felt markers, using crude drawings of burners, flames and filters. One of the transparencies had the word “Clean” repeated three times. I did that talk four times before a total audience of about 400 people.
About five years later, at another training session, a man walked up to me and said the words, “Clean, Clean, Clean!”  He told me he always remembered that talk, and its key concept. So, because I had decided to do my very best with a rather boring assignment, I had left a favorable impression on at least one guy who had been to dozens of training sessions and who had heard numerous professional presenters.

There’s no place for shortcuts. Every task requires your very best. You never know what impact you might have, or what they will remember about you.

Ephesians 6:6-7 (CSB) Don’t work only while being watched, as people-pleasers, but as slaves of Christ, do God’s will from your heart. Serve with a good attitude, as to the Lord and not to people.

Spring is here and it’s my favorite time of year.  Every year about now, when I walk out to get the paper in the morning, I look under the living room window to see if they’re sprouting yet.  Well, it just happened.  The Crocuses are up. Every year the Crocuses announce Spring with delicate persistence, pushing aside soil and stone to display their beauty.  You know, I tried to dig them out ten years ago, to make way for the shrubs.  A Crocus comes from a tiny bulb and I thought I’d gotten them all.  Now I’m glad I didn’t.

Because not only are they beautiful, but they remind me of the power of persistence. Small as they are, they push the new stem upward against all kinds of obstacles to do what they were meant to do – bloom. Compared to the stones on the surface, and the big shrub above, it seems they’re no match and doomed to fail. Instead, they just persist until they reach the surface.

How persistent am I? Am I willing to ignore the obstacles, and the apparent disparity between me and all that opposes me? Am I determined to keep on doing what I know is right; keep on pushing aside barriers and doubts? How about you? Are you facing some big thing; some barrier between you and the life God is calling you to lead? Don’t give up until you have emerged in your full splendor, enriching the world with your beauty and the light of truth that shines within you.

22 Seconds. That’s how long it takes a NASCAR  Sprint Cup car to make it around one lap at Richmond International Raceway (RIR.) I attended this race in 2014 and it was a blast! Even wearing earmuffs, I could still hear the cars go by. More than that, I could FEEL them! Sitting high up in turn one, I could see the whole track and all the pit action.

I’m a big fan of NASCAR. The cars have over 800 horsepower and can reach speeds of over 200 miles per hour. I love the speed, the skill of the drivers, the strategy, the drama and the competition.

Three quarters of a mile in 22 seconds!  Now, if the race was only one lap long, then the guy in front of the other 42 cars would have a good chance to win.  He has all the advantages, right?  Fast car.  Front row.  Clear track. But the race was actually 400 laps, and the leader on lap one, Juan Pablo Montoya, finished in 29th place, four laps down. The winner, Kyle Busch, started in 20th place; the middle of the pack.

Between Lap one and lap 400 there were pit stops for fuel and tires, there were crashes, and there were risks taken or not taken, all of which ultimately determined the final outcome. Where you start out is not necessarily where you end up.

The race made me think. The winner of the race was not the guy who was fastest in qualifying on Friday, but the guy who persisted for 400 laps on Saturday night. And life’s not a one-lap race either. Most of us don’t start out front with all the advantages. We have to work at it. And we have to trust our Sovereign God to transform our circumstances and carry us to a good end. We have to finish the race.

“I have fought the good fight, I have finished the race, I have kept the faith. Henceforth there is laid up for me the crown of righteousness, which the Lord, the righteous judge, will award to me on that Day, and not only to me but also to all who have loved his appearing.” 2 Timothy 4:7 (ESV)

Writing can be fun. You have a story to tell, and you pour it out on paper or into a computer. It’s a great story. But to be a truly great story, it must be edited, so you correct spelling and punctuation errors, add detail, move things around, delete irrelevant material. Then you ask an expert to edit. New errors emerge. About ten thousand commas have to be added. (Hyperbole is permitted to emphasize a point. It’s a writer thing.) Then you find a few more errors. Fix them. Review again. In the end you don’t stop editing because it’s perfect, you stop because you’re tired and it’s never going to be perfect.

It is very much the same thing with the Christian life.  By the grace of God, through faith in Jesus, your sins are forgiven, and you begin a new life as part of God’s great drama of salvation. Now that you are saved, the process of sanctification begins; the process of becoming more and more like Jesus. The Holy Spirit starts to “edit” your life. Corrections are needed in the way you think, in the way you react to things, in your priorities, in your relationships. Some things need to be added; worship, study, prayer, and love. Some things need to be eliminated; anger, lust, greed, and hate.

Just when you think you’ve got it, a new flaw emerges. It’ll never be perfect you think. And you’re right. In this life none of us will achieve perfection. But don’t despair, because on Judgement Day, we’ll get a robe of perfection directly from Jesus. It covers everything since He is perfect.

So, when you read my book, you will find errors. If you get to know me, you will see manifold imperfections. But on Judgement Day, not one comma will be out of place. SDG 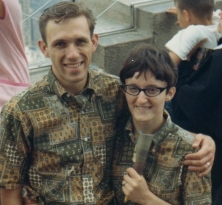 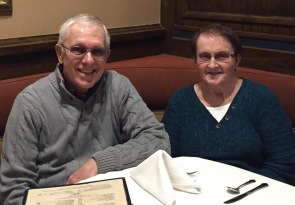 A lot can happen in fifty years. We put a man on the moon. The Vietnam war ended; badly. Personal computers, the internet, smart phones and electric cars came into our lives. A vacant lot now boasts a home and mature trees. Children grow up and have children who grow up. And two people who had no clue in 1966 have grown and changed and tested love and by the Grace of God are still in love; still married.

The joys of a first apartment, a first house, a first new car pale compared to the ecstasy over a first child, and the second one. Working and sweating together on the house or the garden. PTA and Girl Scout meetings, family trips, graduations and weddings; all the joys experienced together.

The pain when loved ones died, the anxiety of childhood illnesses, the loss of old friends. The fears and anxious nights when a car crash ends in flight for life, when a heart attack comes, when cancer strikes, when jobs are lost, when the money gets tight.

But Grace, always Grace, over and around and in all the joy and pain. Sustaining Grace, redeeming Grace that keeps two flawed people true to their vows.

I’m looking across the living room right now at my wife. Fresh from bible study this morning, she’ll probably work on the quilt she’s making for our grandson this afternoon. Later, she will prepare a supper, and we will talk about the day, read the bible a little and settle down for a do-nothing evening.

We are not the same as we were. We have a clue now. Vows mean something. Nothing works very well without God. Love grows from sparks and excitement to a well-settled fire that gives warmth and comfort. Love is strong. God is stronger. Happy Anniversary indeed!